With the French bemoaning the English invasion of their language and the English sniggering at Franglais, it is important to show how much it is the other way round – how deep is French penetration into English. There is a huge overlap in words, phrases and notions, but there is also a mass of faux amis, words that sound or look the same, but have different meaning.
Ellie Malet Spradbery put together a delightful little book False Friends – Faux Amis based on her own experience of traveling in France. I recommend it to anyone who has a lust for all things French, and it should be a must have book for Brits who settle in the old Angevin Empire - from Normandy to Poitou to Dordogne to Provence.
The book is not an academic study of how words travelled from French to English and from English to French acquiring different meanings, nor is it a dictionary. It is rather a fun collection of language curiosities picked on the move. And it reads as such, which makes it really enjoyable.
Apart from faux amis there are sections with current French idioms to enliven your vocabulary and lists of trees, fruit, fish, animals, vegetables and flowers, all handy when you go shopping in France or chat to you neighbours. In fact, the book is published in a format fit for a handbag or a large pocket, and has wide margins where you can scribble down your own favourite pickings of faux amis or just useful words and expressions.
The publishers' note sent to me suggests that Faux Amis is an ongoing project and the book is to be expanded and improved. Spradbery runs a blog at elmalet.blogspot.com, so I hope anyone can go there to offer their own finds.
A few nitpickings.
I wish there was an alphabetical index of all the words, English and French included in the book. It would be better if it had more examples of how the words are actually used - or misused by both the French and the English. And of course while spelling may be the same, pronounciation is very different. Coin is not pronounced as coin in English, but koo-ehn. At a vide-grenier the other day, an Englishman was trying to attract buyers to his stock of 'crocodile' flip-flops by shouting all day 'trois yoo-rohs' (euros). Euro in French sounds more like Ero from Eros. There is very little, if any, help on how to say words the French way which is a pity.
One of my own favourite faux amis are cheminee (fireplace) and chambre (bedroom). You can see French estate agents describing property in English as 'three-chamber with chimney' (three-bedroom house with an open fire). This is not in the book.
Another one, demand (request, in the book) slips into English-in-France so quickly, many stop realising they are different. And every time I see the sign deviation on the road I go mad trying to remember the actual word used for the same purpose in England –  diversion.
Here are a few more, some not in Spradbery's book:
Defense - not allowed - Defense de fumer (no smoking), Defense de stationer (no parking), Defense de uriner (no urinating, yes, there are many of these too)
Donjon - keep of the castle, not dungeon.
Sensible - is sensitive in French, English sensible is raisonnable
Special - difficult (character)
Mouton - sheep, not mutton.
Send in your own favourites to put here or on Ellie's blog.
Posted by Alexander Anichkin No comments: 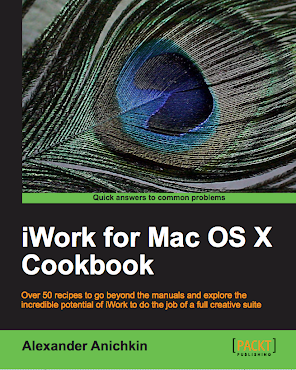 My new book about Apple's iWork suite is out. Click on the image to go to the author's page on Packt Publishing. Free chapter to download.

Do you have a book (fiction or non fiction) you would like to review? Send 200-250 words for publication on this Book Blog by email marked “book choice”.